By admin May 30, 2019 February 24th, 2020 No Comments
The armed is a very accurate and precise vaporization device. The active vapor is free from impurities and even goes through an additional water filter. A feature unique to AroMed. The hot air is provided by an energy-saving ultraviolet-free halogen light bulb which is controlled by an accurate microprocessor. One test that compared using vapors from sage and thyme with conventional medicine to treat asthma, the improvement rate between the two consorts (both comprising of ten long-term severe asthma suffers) was exactly the same.  If you add to this information the fact that vaporizing has no adverse side effects, whilst the inhalation of salbutamol (the conventional treatment) causes tachycardia (a racing heart) and arrhythmias (irregular heartbeats) it would seem evident that vaporizing, or phyto-inhalation, is the way to go. Although, as with all devices intended for medical use, much more rigorous research needs to be undertaken.  However, so startling have the test results been to date, that use of the Aromed vaporizer for phyto-inhalation is now covered by some German medical insurers.

The manufacturers of this piece of kit refer to vaporizing as phyto-inhalation.  Well, I suppose a rose by any other name is still a rose. At first glance, this vaporizer looks like something out of a school science lab, however, it is far more sophisticated than that.  Located in the city of Heidelberg, in Germany, Research and Experience have been working in association with medical scientists based in Cuba.  These scientists were initially educated at Humboldt University in Berlin.  Because the therapeutic use of plants is not so regulated in Cuba, the guys at Research and Experience were able to carry out field trials that would not have been possible in Europe or the US.  Some of the work and the ensuing results have been extremely interesting.

So far, all I’ve told you about the machine itself is that it looks like something out of a school science-laboratory but, given the research-backed positive results of using the AroMed, it is much more than that.

Like most vaporizers, the AroMed works on the principle of applying effective heat to plant material at a temperature that will provoke the release of the active ingredients but that is not high enough to cause combustion.  However, unlike most vaporizers, the AroMed does not use forced hot air, that is, it doesn’t use a fan to blow the warmed air over the cannabis or whatever other plant material you may be using.  It also comes with an additional Aromatop that allows therapeutic or aromatic vapors to be diffused into a room, thus making the room a more stimulating, relaxing, or pleasant place to be.

The updated version of the AroMed, the AroMed 4, was introduced to the market in 2004.  In looks and function, the vaporizer remains the same, although some of the original components have been improved upon.

The AroMed is not large, measuring 3” high and 4” wide, the largest dimension being its length at 9”.  Attached to the rear of the machine is a tall, curved arm – not unlike that found on a reading or desk lamp – at the end of which is the heating element.  Here, the AroMed differs from the norm in that the heating element is, in fact, a miniature halogen bulb, rather than the far more common ceramic or metal.  This, in effect, means that, when the heater is on, you are not subject to minute amounts of metal ions as would be the case with standard heating elements.   Temperature maintained and measured by microprocessors, ensuring that fluctuations are kept to an absolute minimum.  And, perhaps, even more importantly, the temperature is measured from the surface of plant material itself rather than from the heating element, so what you see is really what you get.

Moving now to the front of the vaporizer, the first thing you will notice is the large LED display that tells you the temperature, which can be adjusted simply by pressing down and up arrows until your required temperature is reached.

Despite being a medical-grade piece of equipment, the AroMed is extremely easy to use.  Unusually, there is no need to turn the heating element on first because halogen heats up extremely quickly.  So, the first thing is to fill the water filter with water.  The function of this filter is to prevent the inhalation of small particles of plant material into the lungs.  Once you have filled the water filter, the finely chopped herbs are f placed into the glass container, which is, in turn, placed beneath the heating element.  This is now the time to switch on the heat source and select the temperature.  Within two minutes you can be inhaling your therapeutic vapors.

A further refinement of the vaporizing process brought to you by the AroMed is the ability to vaporize liquids.  This is possible due to the development of tiny glass foam pellets, capable of holding up to 1ml of liquid.  The process is the same only instead of putting dried plant material into the herb receptacle; the foam pellet is used instead.  The lack of a fan to force the hot air over the herbs is not, as one would think, a disadvantage, rather, it is distinctly advantageous.  In forced-air vaporizers, unless you are quick-thinking enough to switch your vaporizer off when you are not inhaling, the precious essential oils of the plant will continue to be produced and, because they are not being inhaled, they will simply evaporate.  The Aromed’s no-fan system means that vapors are only produced when you are inhaling and at no other time.  Sometimes, less is more! 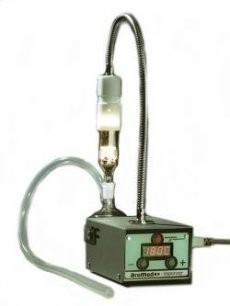