The Vapor Genie vaporizer was one of the first and original vaporizers to hit the market, manufactured by the VaporGenie Company operating out of Blacksburg, Virginia.

In these days of massive, high tech digital vaporizers, does the original Vapor Genie vaporizer still have anything to offer? The answer is a resounding yes.

The Vapor Genie vaporizer heats up your weed by use of a normal butane lighter. By heating a patented ceramic filter, a mixture of hot and cold air currents is created which passes over your weed (or other aroma-therapeutic herbs) at a temperature of around 300-400 degrees F. This is enough to vaporize your weed, without combusting it with a naked flame. The result is a smooth vapour that doesn’t have the same soot and particle content as smoke.

In addition to that, with a price tag of only $50 for the Classic (the range runs from $40 for the Aluminum Bat up to $100 for the Glass Pipe with fancy carry pouch), the The Vapor Genie Vaporizer is still a good product at an affordable price. 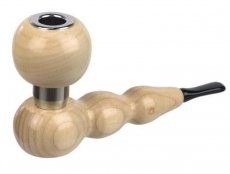